Grizzly-PAW: Grizzly Population Assessment in Yellowhead is a NSERC funded collaborative Research and Development (CRD) project to improve our understanding of the impact of natural and anthropogenic disturbances on Grizzly bear habitat in the Yellowhead region of Western Alberta. The focus of the project is on geospatial information, disturbance ecology and animal geo-temporal movement analysis and involves the University of British Columbia (UBC) Alberta, and Saskatchewan.

Grizzly bears are considered a threatened species in Alberta and as a result, a considerable amount of research has taken place on conservation strategies to inform policy makers and management activities in the region. This research links with research led by the Foothills Research Institute’s (FRI) Grizzly Bear Program who, with a large group of partners including those from the energy and forestry sectors, universities, the private sector, and both provincial and federal governments, conduct research on grizzly bear populations in Alberta to support provincial recovery efforts. The project aims to address eight key questions posed by industry. 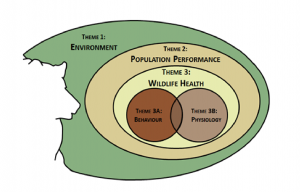 Based on the questions provided by our industrial research partners, this CRD addresses a suite of linked topics using an overall conservation management framework described through a series of applied research themes. Each theme answers specific questions and produces key deliverables to our industrial partners as well as provincial and federal government partners.

Theme 1 addresses questions around the Yellowhead environment and sets the broader landscape and environmental context of the Yellowhead bear management unit. Theme 2 involves investigating demographic responses relating to population status, size and change; Theme 3 focuses on grizzly bear health, which involves individual-animal responses relating to their (3a) behaviour and (3b) physiology.

Disturbance mapping provides key information to address several questions about grizzly bears. This research will use remote sensing to monitor human and non-human changes in the landscape, snow cover fluctuations, and road utilization. Research will further the definition and mapping of eco-anthromes and evaluate the use of biodiversity as a proxy to the health of other species.

We consider that demographics (e.g. sex and age class) and trends (e.g. increase) in the Yellowhead bear management area (BMA 3) grizzly bear population are largely under the influence of two broad categories of factors: 1) top-down factors, which are those related to mortality of bears; and 2) bottom-up factors, which are those related to the food and nutritional resource dynamics of grizzly bears. A third more specific factor influencing the population are the translocations of individuals (management bears) into BMA 3 from other populations. Population trends and demographics are also influenced by natural rates of immigration and emigration, although frequently these can be assumed to be similar in value.

Movement is a behavioural indicator of grizzly bear health that can be used to illuminate spatial variation in the current conditions of bears and set the stage for modelling responses to future change. It is the fundamental behavioural characteristic linking wildlife to the landscape and individuals to a population. Given the wealth of grizzly bear positional data and landscape data generated from over a decade of research in Alberta, the Yellowhead grizzly bear population represents an unparalleled opportunity for understanding and predicting movement of these elusive animals, and understanding how our actions and decisions influence their behaviour.

The overall goal of this objective is to develop novel techniques to assess the physiological status of individual grizzly bears using non-invasive sampling methods (collection of hair and skin biopsies) that do not necessarily require the capture and restraint of bears. This approach can be thought of as “conservation medicine”, where modern, state-of-the-science analytical techniques used routinely in human biomedical sciences (e.g., disease diagnosis, pharma) are applied to free-ranging wildlife. There are two techniques we will implement during this research project: quantification of multiple steroid hormones in hair, and proteomic analyses of multiple proteins expressed in skin.